Posted by Nichole C. on December 10, 2015
The Lady Varnishes was one of my first indies. The brand definitely has a place in my heart. So you know when I found out about a Maleficent collection, I was all over that like peanut butter on jelly. It took me a bit longer to get these swatches and reviews done thanks to some defective body parts, but I promise it was worth the wait. 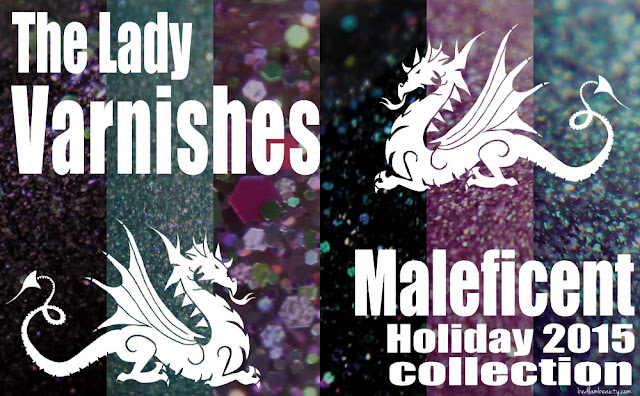 I am a Maleficent fan-girl from way back. As a kid, Sleeping Beauty was my favorite...but not because of the Princess. Briar Rose/Aurora can gtfo. For me, it was all about Maleficent. Back in the 80's, we didn't have the glut of Disney swag that exists nowadays, so I had to settle for pages torn from coloring books...Until I grew up. When I was a senior, our class went to Disneyland for the only good thing to come out of that god-forsaken school official trip. My only souvenir was a Maleficent lapel pin. Then the following year I went again for a honeymoon (yes, I got married young) and I bought a whole bunch of crap. It was awesome.

Evil Like Me
Evil Like Me is an royal purple dripping with shifting teal flakes. This is exactly the color that Maleficents wings should be. Or her lips. I dunno, something. The formula was easy and smooth, and I only needed two coats + Seche Vite for these pictures. 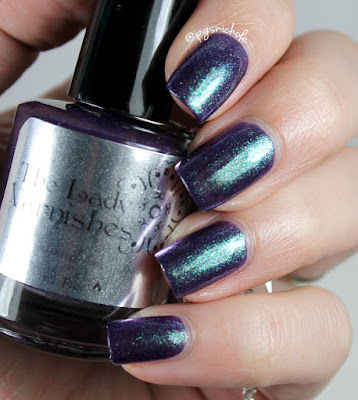 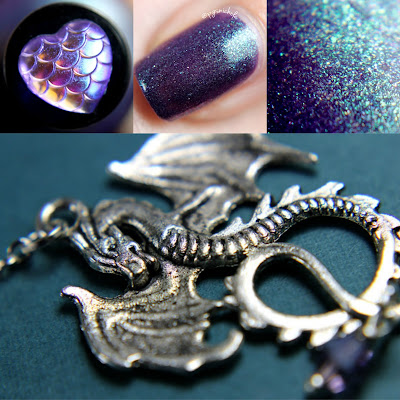 Give Me What I Want
Give Me What I Want is a cool wine jelly with a scattered holo, holo microshards and a subtle and delicate pale citron shift that made me curse trying to photograph. It showed a little as a pale gold in the flash shot, and that was as close as I got. It dried slightly gritty, and next time I might add a thin coat of Gelous to the finished product. I used two normal coats below + a layer of SV. 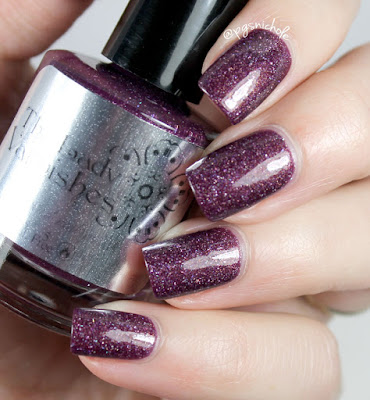 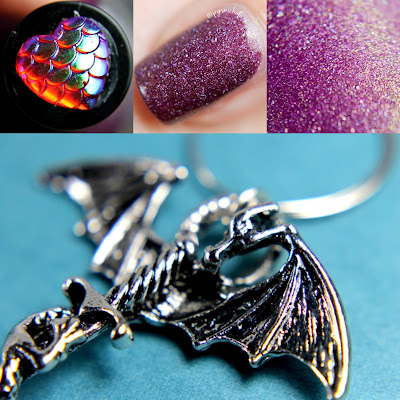 Hatred & Revenge
Hatred & Revenge is the perfect shimmering jade green with a soft gold pearl. It reminds me of a certain kind of stone, but the name escapes me just now, and googling "green stone" is hilariously useless. This shade would almost be a one coater, but it needs a thin second layer to smooth out brushstrokes. It dried ever so slightly matte, so I used my normal SV for these photos. 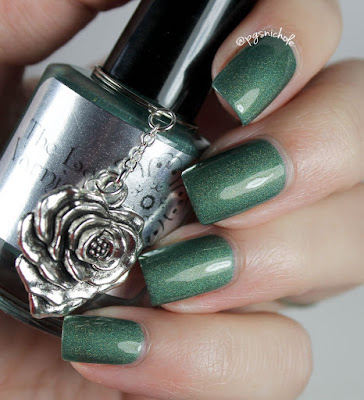 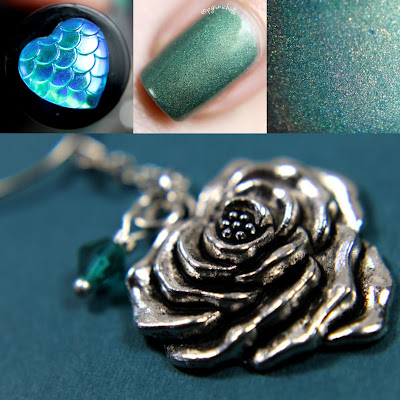 Wicked Wish
(over Lune)
Wicked Wish is a beautifully loud glitter bomb. I spy pink, fuchsia, lime, purple, and holo glitters of all sizes in a slightly pink tinged base. The glitter is flawlessly suspended and was super easy to apply. I wasn't 100% that this was just a topper, so I decided to try it both ways. I layered three thin coats on my middle finger, and I used two layers over Lune on the rest of my fingers. It isn't quite opaque enough to stand alone, but it is so sparkly that I don't really mind. I do adore it over the pale green Lune though. 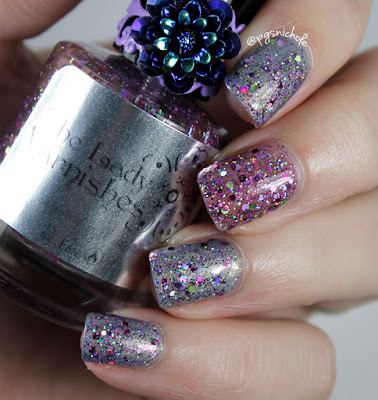 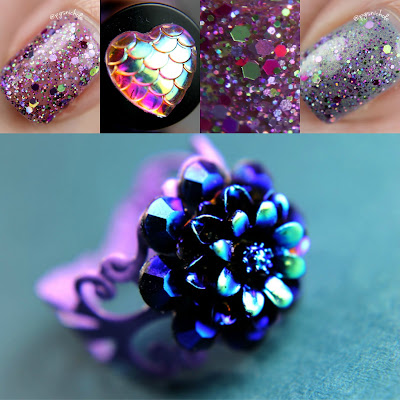 Mistress of All Evil
Mistress of All Evil. Any doubt to whom this shade is dedicated? This is a darkened base filled to the gills (or claws?) with shifting purple flakes and glitters. I think I actually bought the oops version of this last December. I still love this, no matter the version. I used two thin coats for the pictures below, followed by a layer of SV. 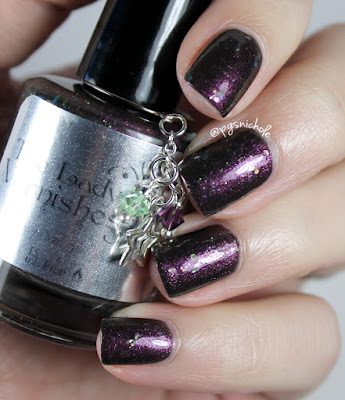 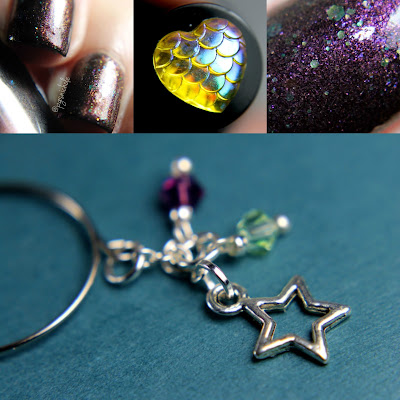 Embrace the Darkness
Embrace the Darkness is a black-as-pitch balance of microglitters and multichrome glitters. It dries to a slight texture, and I think I need to try it matte because wow...I predict great things with that. I used three thin coats over bare nail + a layer of SV here. I think you could also try layering it over a black for a thinner look. 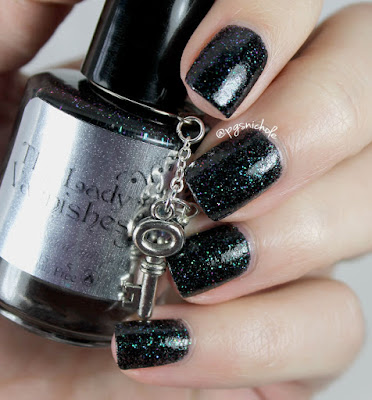 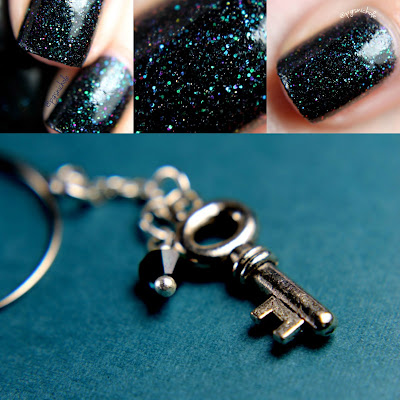 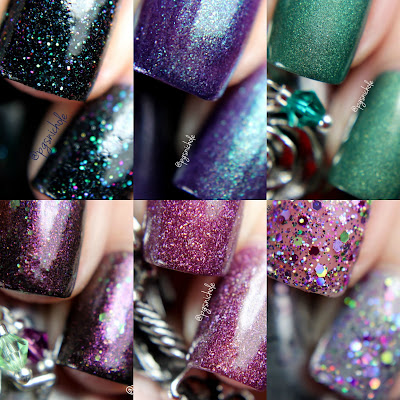 So what do you think? Does this do the great Lady of Dragons (the original one) justice? I dunno if I can pick a favorite, but Hatred & Revenge seem to have served her well thus far...

You can grab this collection and a ton more in her Etsy shop, and you might as well stop by and join the fb fan group. It's brand new, and promises to be a good group of kids.