Posted by Nichole C. on November 11, 2015
(promotional samples ahead)

Octopus Party Nail Lacquer seems to have mastered indigo. He has created denim shades, dazzling sparkly cobalts...and now violet leaning. I can't even fathom where he could go next. I decided to compare the current queens of indigo, in case some folks were still undecided as to whether they should hunt down all three...and spoiler: you should. 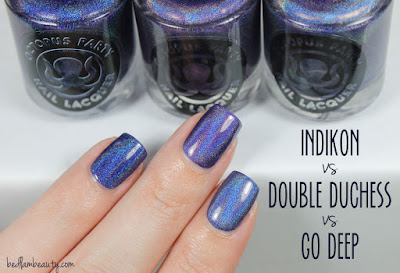 At first blush, they look pretty similar. All three are deep, indigo-ish holos. They have a similar amount of majesty and noise...if you don't pay too close attention. As soon as you start to really look, you'll see the differences.

In the bottle, it is quite hard to tell the difference at all. If these were a regular brand in a store, you might grab one without noticing that there were three distinct shades here. 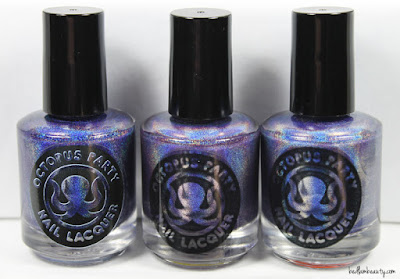 But they are different. You can see some holo glitters twinkling in DD here and there. 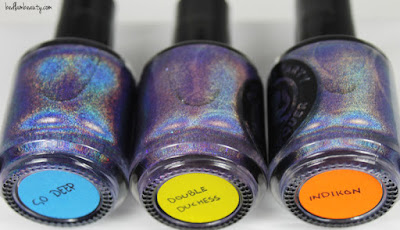 And once they go on your nail, the differences, to me, are very obvious. Go Deep is a glaringly holo deep cobalt blue, and super opaque on the first stroke. Double Duchess is a true indigo violet, with a sprinkling of holo glitter and an obvious purple flash under the holo rainbow. Indikon is the quintessential denim holo. Its metallic underbelly adds to the dusty denim feel of the finished product.

See? I told you you needed them all. 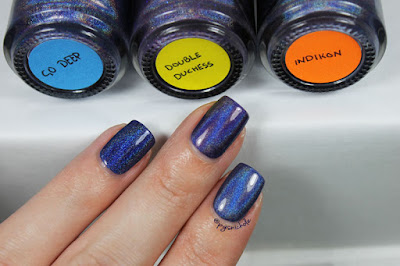 Here is a side-by-side macro comparison.

And now for the original swatches, in case you somehow forgot how amazing these shades were on their own. I mean, I guess it could happen...people get abducted by aliens and have their memories erased all the time right?

Final Thought
These are similar, but not at all the same. Even if you aren't jonesing for all three, maybe this will at least help you figure out which one you can't live without. 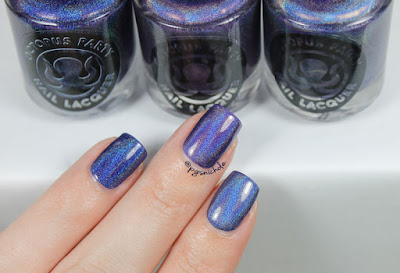