Posted by Nichole C. on November 06, 2015
(promotional samples ahead)

Glam Polish Anniversary Ultra Holos. Only Glam Polish could take something as amazingly stunning as a holo and make it more...holo. And to have been doing it at such a level for three years now...just wow. Instead of waiting for us to shower them in gifts and accolades, they have created a collection of nine heart-stopping holos that will make you feel like celebrating.

Delirium
Delirium is an icy violet ultraholo. It is insane. Just your typical, flawless, perfect Glam formula. I am itching to try this one out with some of the others in this collection. It is so opaque that I bet someone who doesn't cry at the sight of a stamping plate could really do some neat things here. This purpley indigo could be opaque in one coat, but I used two below. 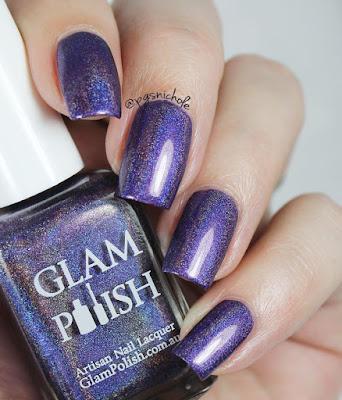 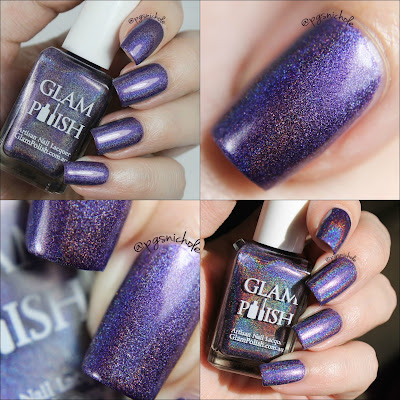 Ecstasy
I had such a time describing this shade. Its wine-plum-softly vamp-ruddy violet...pretty. This shade is pretty. Its like an ultra-holo Radiant Orchid turned to 11. This polish was slightly thicker than the rest, and for normal wear a single coat would be completely perfect. I used two below, but only for the sake of photos. 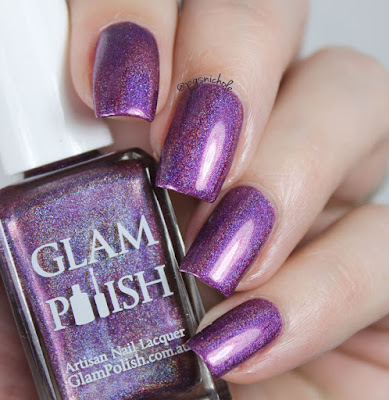 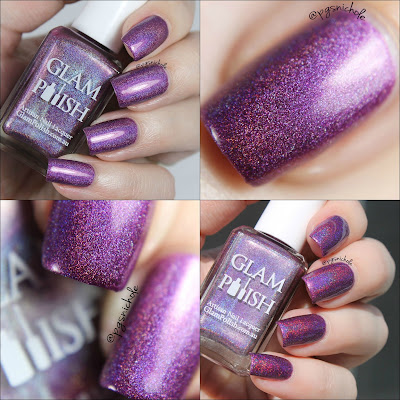 This is the best pale copper/champagne/magically pristine fresh penny shade I have ever encountered. Madam Glam described this as a "rose gold" and by god it is.There are tiny flecks of orange in this blushing ultra holo that make it so unique. It has a delicate metallic-like base so it even looks compelling in cloudy, dim weather. This one actually got a wear test: four hard days and not a single chip and such minimal tip wear that a normal person would never have seen it. I used two coats here and I think that was exactly right. 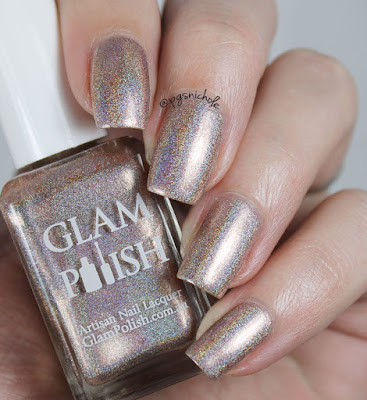 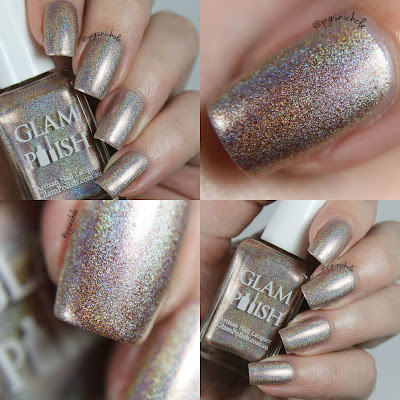 Luscious
Luscious is a vivid rose ultra holo with a metallic base. Obviously, this one is my favorite. It is my happy place in terms of pinks. I used two coats below and I was over-the-moon. It is everything I want a pink-leaning fuchsia to be. I don't know what else I could say about this color that wouldn't sound like a lovesick teenager talking about her favorite pop star. 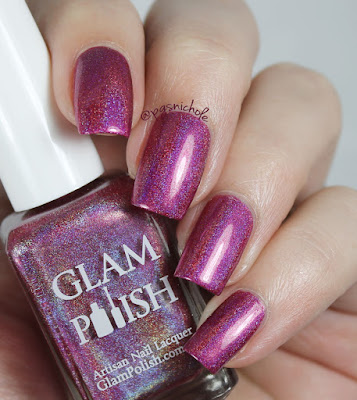 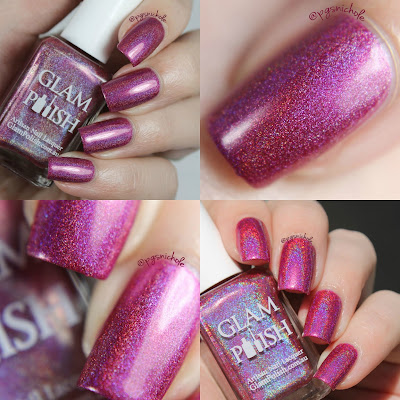 Ornate
Have you been searching for a flawless platinum polish? One that will dazzle your friends and neighbors and possibly blind passing aircraft? If the answer is yes, then Ornate is for you. It is the perfect platinum. Sleek, simple, and SFW, this shade is opaque in 1-2 coats. This would be amazing in a art-deco style bit of nail art. 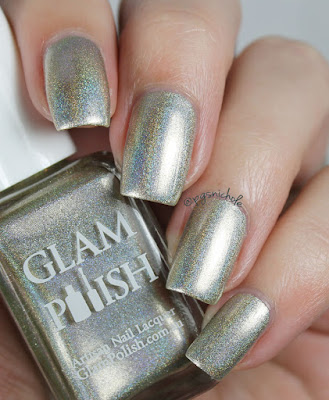 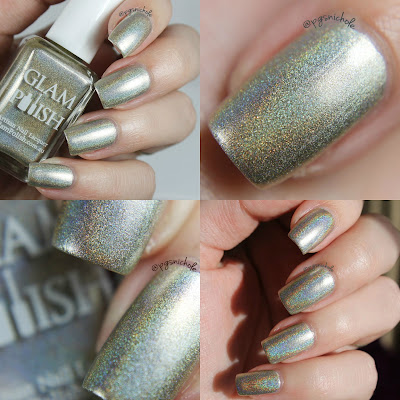 Precious
So many jokes I could make right now about The Precious.  It is a delicate, rosebud pink. Generally I would never pick this shade for myself, but I actually ended up wearing this one for two days because I loved it so. I barely needed two coats for the pictures below, even with nails as long as they are. 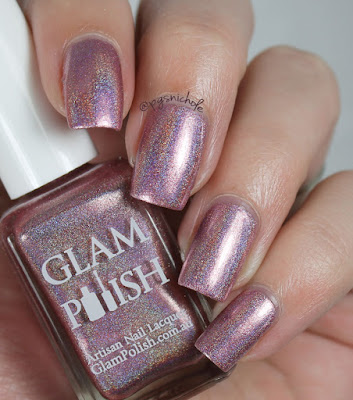 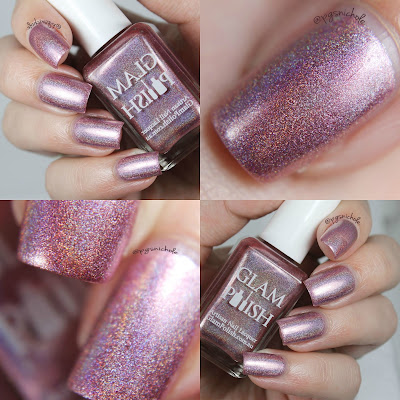 Rapture
Who doesn't love watermelon red? Crazy people, thats who. This warm, fruity shade leans a tiny bit coral in some lights, and almost fruit punchy in others. It has a glowing metallic base, and is totally opaque in two coats. I did find the formula thinner than the others, but reds are usually like that. It was not so thin that it flooded, and I actually did zero cleanup for this one. 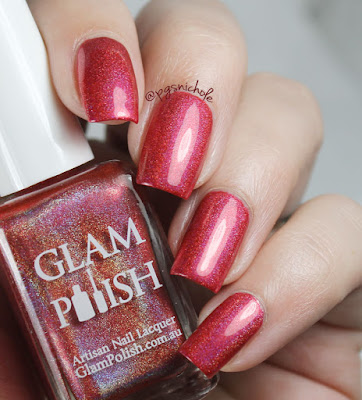 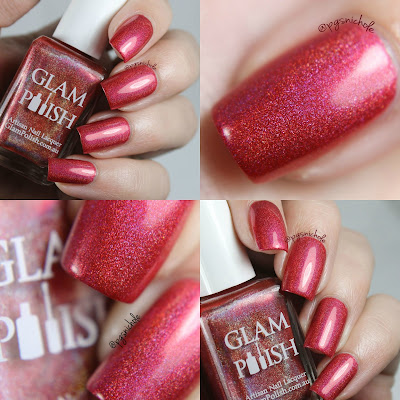 Glam Polish makes some crazy polishes. Each one knocks my socks off in a way I never previously expected. The formulas are amazing, the colors are jaw-dropping, and the prices are so reasonable. I am really glad they don't charge by the sparkle.

These will be available today, November 6th at 5pm EDT from the shop. Which one do you have your eyes on? 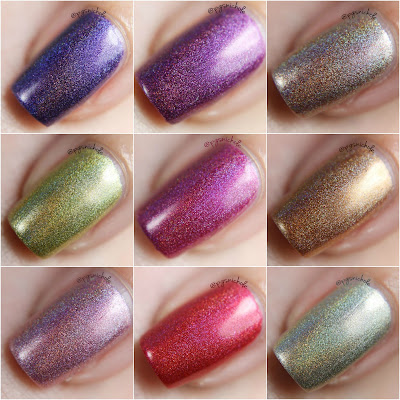