How Much Does a New Beauty Blender Bleed?

Posted by Nichole C. on August 20, 2015
I am a huge fan of Beauty Blenders. I am currently on my third actual branded sponge (not counting the dupes I've tried) and I am completely enamored with them. But this time, instead of buying the usual hot pink...I chose another color. When I washed it that first time, I was shocked by the color bleeding...and hence this post was born. 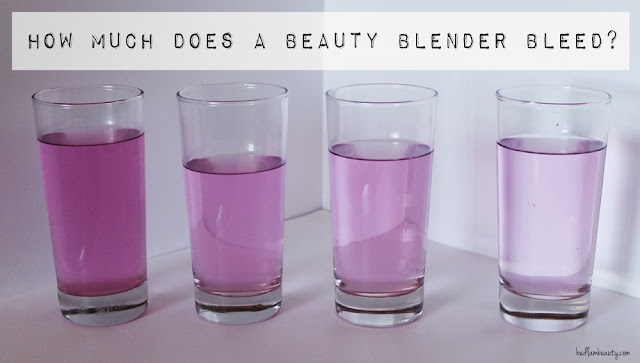 Back when I spent a lot of time on Reddit, I used to see this question pop up from time to time. Someone would wash their Beauty Blender and notice the pink tinted water and freak out. Everyone who had used one for a while would assure the original poster that it was normal and safe and fine. It was never very much pink, and it usually stopped bleeding dye fairly quickly.

For the first time ever, I bought a non-pink sponge for no particular reason. I was at Sephora with my superawesomepal Beth, and I grabbed one because we were there and I needed one. I got this one here (and I highly recommend it.)

I'm a spaz, and I have to wash everything before using it. So I poured a bowl of hot soapy water and tossed my sponge in there. (see how I clean my makeup sponge here) Within five minutes, I noticed that the water was frighteningly red. Holy shit. So I decided to break out some weak-ass science and see how much dye really bleeds out.

•One
This was taken after the sponge had been rinsed once. The sponge was squeezed five times in 100ºF water. It was REALLY pink.

•Two
This was taken after the twice rinsed sponge had been soaking in 100ºF water for approximately twenty minutes. No squeezing was involved.

•Three
This was the result of another twenty/twenty-five minute soak in 100ºF water. No squeezing here either.

•Four
Another twenty-five minutes in 100ºF water left me with an easter-pink glass of water.

After all this soaking, I was starting to wonder if the red dye would ever leave the sponge. I decided to give the sponge a good washing, like I normally would, and then squeeze the water into a glass to see what the color would be then. I use Johnson's Baby Shampoo and I massage the sponge under running water for about five minutes. This was the result: 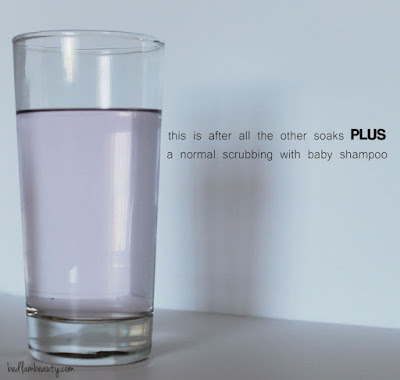 The tl;dr is that the sponge bleeds. BLEEDS. A significant amount, as it turns out. Now, even though this color leeching is a lot more than I expected, it doesn't transfer to your face. At all. No bright red spots for me, at least not yet. But I know that this can be really disconcerting, especially if you aren't used to the slight tint from the regular Blender.