Posted by Nichole C. on November 17, 2014
Can you believe I found this on clearance at Sally's? I actually hemmed and hawed over it as well...not sure if I wanted it because I liked it, or because the internet was all a-flutter over it. But it was marked down to $3.99 and it was a red-tag weekend...so I kinda had to bring it home. I'm glad I did. 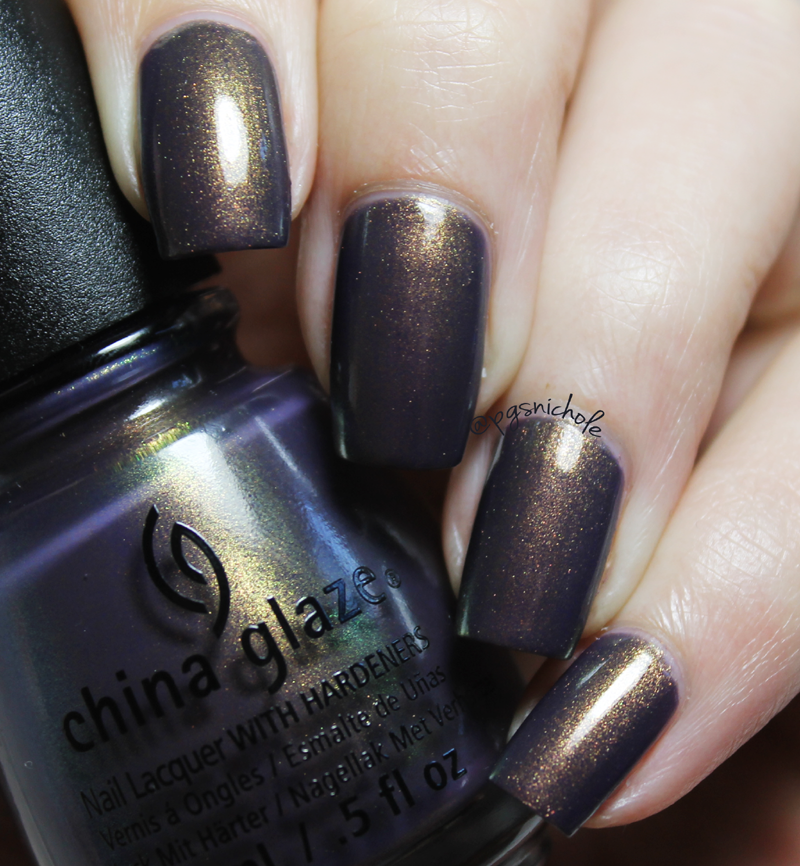 This is not Choo Choo Choose You's first appearance on the blog. Amanda swatched it back in September. I vaguely remember seeing and liking it...but obviously not enough to retain that information longer than a second. I'm going to call this polish one of those "seeing is believing" colors. No photo will ever truly capture it.


Amanda called it a "...deep gray-purple base with a red/gold/green shifting shimmer..." I don't not agree, but I feel like it doesn't go far enough to describe this polish. The shift it has is reminiscent of a sunset. It goes from a deep peach to orangey-gold, and then to an almost olive gold color. At extreme angles, there is a decidedly cool green shift. All of the pictures in this post were taken on the same day, within about 10 minutes of each other. The only difference is the light source and the angle.

Application-wise, this stuff was a champ. I used three coats...but I nearly always do. It was pretty streak-free and quick drying, which I expect from a China Glaze polish. It is a wee bit thin, and although it doesn't effect the application at all...I would recommend wearing a good base if you have ridges on your nails.


I would definitely put this polish in the same camp as Awakening. It has a lovely depth and variability that makes it wearable on its own...even for a nail art nut like me. Did you buy into the hype on this polish? I did, and I am soooo glad.
China Glaze nails swatches