Posted by Nichole C. on July 23, 2014
It's time for science again! Well...science-lite, anyway. I've done all the inner planets, so I guess it is time to tackle the gas giants. The biggest and baddest is also the first one: Jupiter. I seriously struggled with this one, probably doing the marble about 5 times before I gave up and went with it. In the end, I think it turned out ok. 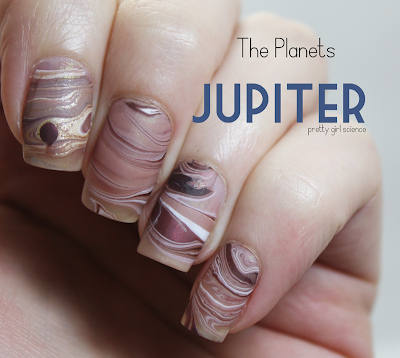 Jupiter is the 800lb gorilla in the solar system. It has a mass greater than all of the other planets combined (two and a half times more, to be precise). Because it is so big, its gravity affects everything around it...some folks think that is why we have an Asteroid Belt and not a 5th planet out there. It also behaves like a big brother for the inner, rocky planets...it's probably why we don't get smashed by giant asteroids on a daily basis.

Jupiter is a gas giant, which means that it is most gas and liquid swirling around a probable semi-rocky/solid core. It rotates so fast that it is actually slightly oblong instead of spherical. It is weird. Add to that the infamous Red Spot: a giant storm the size of the Earth that has been raging for at least 300 years. 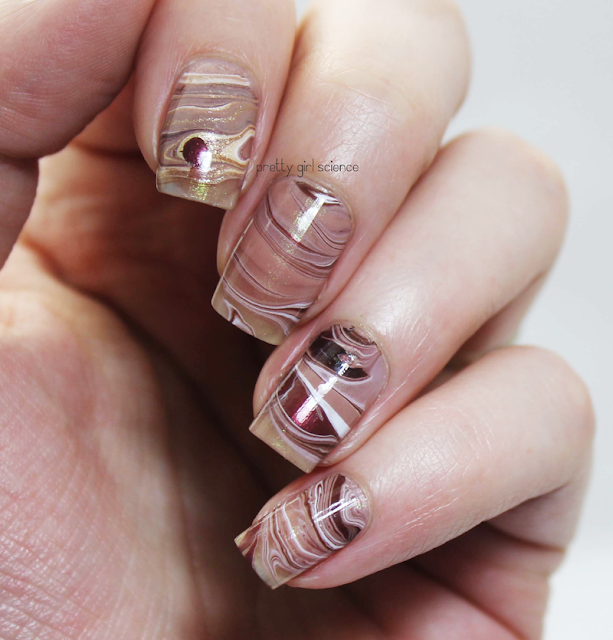 I actually did this over nothing but a clear base coat. Like I mentioned earlier, this took me a few tries to get to a place where I was happy with the outcome. By try #3, I was completely over taping and opaque bases. My one regret is that I attempted to add the Red Spot. I feel like it kinda ruined everything. But I think I got the right idea overall.