Posted by Nichole C. on May 12, 2014
Bottles can be so misleading. I saw this on the shelf, and thought "Wow, its like a tiny little slice of night sky. I need that." Since I can't pass up a good sale (buy one, get one half off) I grabbed this along with When in Chrome. I have never been more sorry about anything polish-related.

(thankfully, I'm slightly insane and keep bottles of clear around the house)

I assumed that this was going to be thin, possibly even a jelly. NOPE. A cream. Of course. Because throwing chunks of glitter into a thick cream base is brilliant, there is no way for it to fail! Riiiiight.

This stuff is like an aborted texture polish. It's not textured enough to be interesting, nor is it smooth enough to be worn without eleventy-three coats of topper. I used one thick coat of seche vite here, and it was not enough. Add to that the fact that the base it too thick for showcasing glitter...and you can just see the epic fail all over my fingers. You'd think I would know better by now. 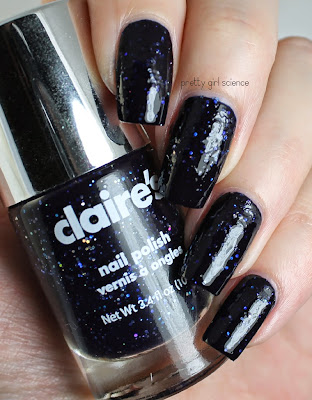 But then, I remembered that I had a couple of bottles of clear polish laying around. Maybe, just maybe I could salvage this horrid bottle of misery? There is a sound concept here with the navy and holo glitter. So I poured almost 1/4 of this bottle into the clear...and made the worst jelly I've ever seen. The glitter didn't want to leave its dark, gloopy home and the clear wasn't made for glitter, and so what little I could force out sunk immediately to the bottom like a box of rocks. Eventually, I gave up trying and shook my new polish relentlessly for about five minutes, and applied it as fast as I could.

It turned out pretty nice, though I wish there was more glitter. 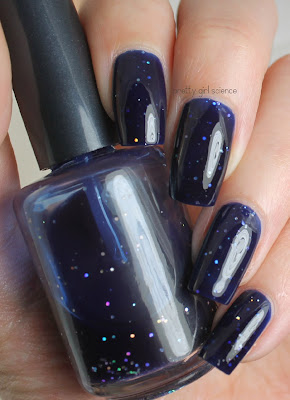 What a difference, right? Of course, you can already see the glitter settling in the bottle...but what are you gonna do? It's better than the lumpy, miserable original. After searching for other swatches, I know it isn't just me being a moron...this stuff is awful in its original form.

this post originally appeared on Pretty Girl Science on 12 May, 2014 and is represented here with permission of the original author...which is me.
Claire's jelly nails swatches